Queens of the court! 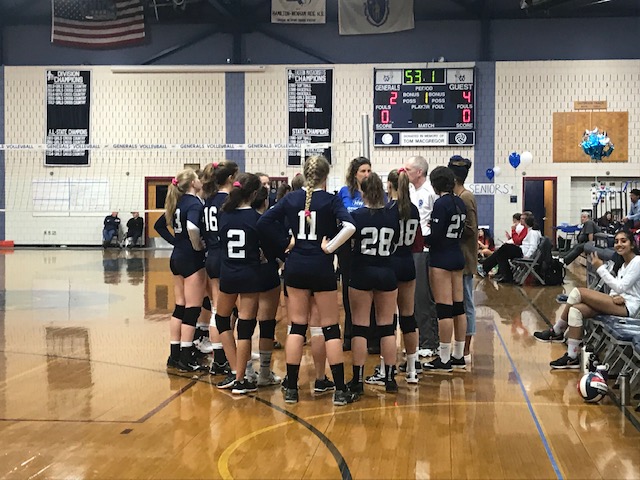 The varsity girls in huddle with Coach Flynn and Coach Rob.

You look onto the lines that mark the division between two teams. You sit in the bleachers and watch two rivals who are starting the battle of the season. The court is filled with determined players who are ready to bump, set, and spike their way to victory. The crowd is silenced by the whistle marking the beginning of the game. Welcome to Hamilton-Wenham volleyball!

There were four seniors on the varsity team. With about 16 people, four swings and twelve players, the team was balanced among the upperclassmen and a few new freshmen. This year’s team claims three captains, seniors Vanessa Brown, Rose Wosepka, and junior Evelyn Easdon.

The defensive positions include the right side, who helps carry the pass, attack, block, and serve. The libero maintains good passing skills to receive and regulate the passes on the court. The libero wears a different color shirt than her teammates when playing and generally plays toward the left side of the court. Finally, the middle hitter must prevent the opponent’s offense and block the ball from crossing onto her side of the court.

This year’s captains explained how excited they were to be role models and leaders of the team this season. Captain Vanessa Brown is a senior and plays multiple defensive positions, including outside hitter, right side, and libero. She mentions the strong bond of the team with enthusiasm and excitement. She stated, “They’re like family; it’s awesome to come to a solid support system.”

Rose Wosepka is also a captain on the team. Now a senior, Rose is a middle hitter who started playing volleyball as a freshman. She also plays with the North Shore Volleyball Club. “I really like the camaraderie of the team and meeting people you get to play with. I love when [my teammates] get to ask me things and I can help them. I love being a figure to look up to.” Seeing her teammates succeed on and off the court is a big priority for Rose, as well as making plays and scoring points during the sets.

Evelyn Easdon, a junior playing outside hitter, was nominated to be captain by her teammates prior to her senior year. Evelyn made varsity her sophomore year after doing various clinics and camps throughout middle school. Prior to the final games she exclaims, “I think we have taken a couple losses, but now that we know who we are playing [in upcoming games], it will be fun to move forward… and I’m excited to see how far it takes us.”

This season, the girls finished off with a record of 12-10, making them third in their division. Blue and white streamers, balloons, and posters made senior night for the Generals during their last game of the season against Reading. Despite losing the match, the girls held their heads high against the Rockets, who were first in their division.

Freshman Mia Flynn made the varsity team for volleyball this year. Mia has been surrounded by this sport her whole life. Her skills pay off when she steps onto the court. She is an outside hitter and works on attacking the ball. Her offensive position allows her to score many points in each set for her team. “My biggest takeaway is hard work. I haven’t really been challenged to this extent before. Playing with all the older girls is amazing. They’re all so kind. I feel like I’m really improving by being challenged.”

Mia’s attitude and love for the sport has earned her 2nd in the state for digging and third for hitting out of all freshmen. When asked about having her mother as her coach, Mia explained, “It’s weird because she isn’t my mom at volleyball, she’s a coach. She’s an amazing coach, [who’s] very calm and collected.”

Mr. Genualdo, who has been the Athletic Director for seven years at Hamilton-Wenham, and for seventeen years over the course of his career, wanted to discuss the strengths of the team. In his high school years, Mr. Genualdo played football, baseball, and basketball for St. John’s Prep. He attended Boston College as a walk on for the football team. When asked about the history of volleyball at Hamilton-Wenham, he explained, “Volleyball is a unique sport that has been at our school since roughly the 1970s. It was the first all girl sport and maintained an established tradition than other sports.”

“[Mrs. Flynn] has always done a great job creating interest through camps and clinics, opening them to as young as 5th grade. [Then,] they are exposed to it and when they get to high school they like it and have a basic set of skills [established].” He describes that during states, teammates are given a figurative torch of responsibility to pass on to one another to make the next play or dive.

On November 1, the Hamilton-Wenham volleyball team ended their postseason after losing three sets to Lynnfield. Despite the loss, the girls had an unbelievable season and demonstrated their trademark of excitement and hard work during their games.

The girls were able to make it to the second round of their division before their journey reached its end. However, their work and skill led them far into a season of treasured memories! Next season, the girls will return with this amazing experience, as well as build stronger sets and hits that can carry them into playoffs!