The JUUL and its surrounding health myths 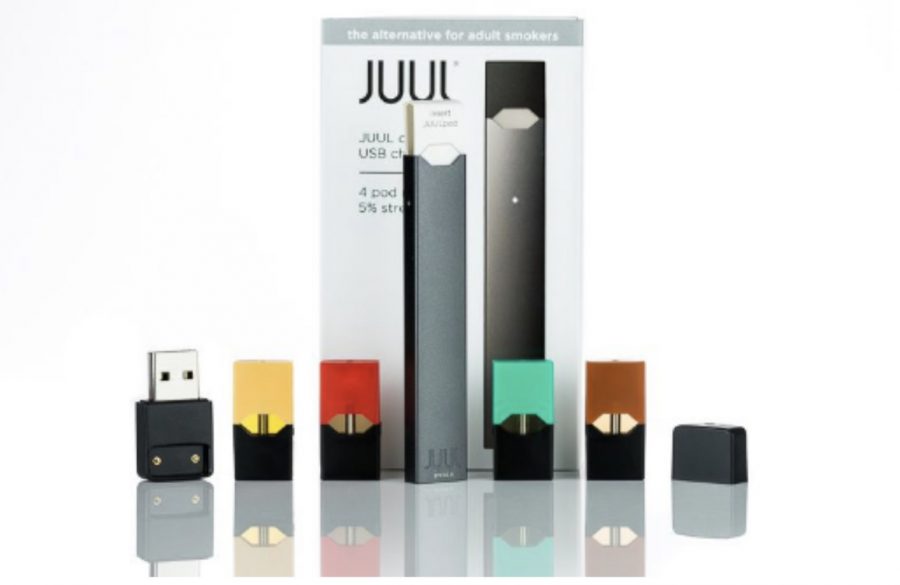 Picture showing the contents of a new “starter pack”. (Image by, JUUL.com)

It is small and grey. It has a tiny light in the middle and looks shockingly similar to a flash-drive. By now you probably know what I’m talking about, the JUUL: a sleek vaping device that has grown increasingly popular among teens across the globe. This device is known for its slim body and the many appealing flavors, and it’s becoming more and more prevalent among high school students everywhere.

As its popularity among teens grows, many have either tried this device, or at the very least, heard the low hiss of one in the stall next to them. This is just one of the many examples of the effects of nicotine, and its ability to expose teens to other dangers brought on by these devices.

Juuls arrived late to the e-cigarette market in 2015, about eight years after vaping devices first began appearing in the United States. But the company, called Juul Labs, has surged ahead of competitors. In August, Juul accounted for seventy-two percent of the e-cig market, according to news reports. With an appearance that mirrors a flash drive, the Juul has been established among youth as the vaping device of choice.

Many will be quick to argue that there is an uncertainty surrounding the health dangers behind JUUL, as many are simply unaware of the effects of the device. According to Scientific American, users are at high risk for “popcorn lung,” which is a form of lung cancer that caused by formaldehyde, a known carcinogen found in vaping e-liquids. Those deep inhales also leave room for silicate particles to enter the lungs, increasing the likelihood of developing lung diseases such as chronic obstructive pulmonary disease.

Juuls may seem far safer than smoking, but according to Jeff Calaway, an FDA commissioner, one Juul pod is equivalent to smoking a pack of cigarettes. If you’re a “one pod a day’ kind of vaper, that’s no different than a common pack-a-day smoker. Some may question the danger of nicotine itself, but current yoga instructor and form life skills teacher Danielle Petrucci does not, saying, “Withdrawal and it’s symptoms become very irritable, hard to focus, especially in school because of the long sitting periods waiting for a ‘fix’. Anxiety is also known to be a strong side effect.”

It has been reported frequently at our school that students vape in the bathroom. As common combustion cigarette usage has gone down, among youth we’ve seen a sudden spike in vaping to replace nicotine consumption. This survey was conducted by class of 2018 graduate Griffin Penn, during his senior year, and it just goes to show the extreme prevalence JUUL has in our community.

If the health risks alone aren’t enough to deter you, then maybe you should know that if you use JUUL or other nicotine products, you’re twice as likely to try a traditional cigarette.

In early September, the FDA cracked down on PAX labs, (Creator of the JUUL) seizing documents and other data in efforts to prove the company has been trying to establish a target market of underage children. “We cannot allow a whole new generation to become addicted to nicotine,” says FDA Commissioner Scott Gottlieb.

But what does PAX labs have to say about all this? The company recently modified the names of its flavors — using crème instead of crème brûlée and cucumber instead of cool cucumber. Juul said it “heard the criticism” that teenagers might be attracted to the flavors and “responded by simplifying the names and losing the descriptors.”

The JUUL´s common misuse among teenagers continues to rise, adding to the total of adolescents with possible or definite nicotine dependence, which poses a serious threat to our youth. However, this isn’t to say that adults already struggling with nicotine addiction shouldn’t switch to a potentially less damaging alternative such as JUUL.

Danielle Petrucci stated what she would like to be set up as a precaution to keep teens from getting their hands on this addicting device. “Make it more difficult for teens to purchase by having it be only a quitting mechanism regulated through medical distribution”. This would be a positive step to make sure these devices end up in the right hands, in the new wake of the current national vaping epidemic.

Schools have also noticed this sudden spike in vaping in the community as well. If you go into the Math and Science office, you’ll notice a “number of vapers caught” poster hanging on the wall, providing a scary reminder of the damage done in across our school. Assistant principal Bryan Menegoni is working alongside student council in efforts to pass a rule that would fine for students caught with the contraband on school grounds as a way to prevent usage in school.

Menegoni explained how next year the school is going to try and make the punishments harsher. In an interview he stated that if a student is caught they will have to pay a $100 fine and additional punishments added on. The policy enforced at our school currently is 2 days after school, for the first time, 5 day for the second time caught, and suspensions in sports will be coimbined with detention.

Hopefully this information can help further inform you so when you next have the choice to use a JUUL, you have the proper facts. In the end of the day you have your body for as long as you’re here, so making well informed decisions that can affect your future well being is a proper step in a long and happy life.