Mamma Mia, here I go again! Hamilton-Wenham Regional High School is putting on the world-famous musical for its 2019 production. Filled with well-known, catchy numbers, the show features the talents of senior Helen Peppler in the lead role as Donna Sheridan. Peppler gives a dazzling performance as the mother of Sophie Sheridan, played by sophomore Eve Gujdral.

Set on an island off the coast of Greece, the musical revolves around Sophie’s marriage to fiancé Sky, played by Ian Castracane (sophomore). In an attempt to find her biological father, whom she’s never met, Sophie invites three of her potential fathers to the wedding. 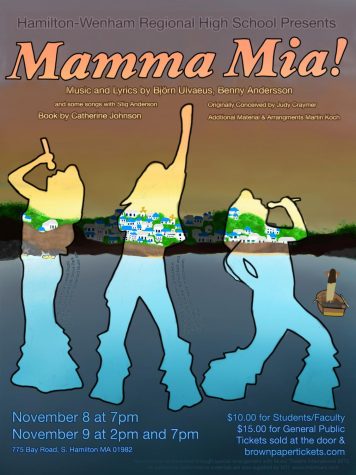 The three dads do a stellar job in portraying the utter confusion that comes with being ambushed by their possible daughter, as well as the nostalgia their return to the island brings. They are reminded of their youth and the “good old days.” Donna’s best friends, Rosie and Tanya bring humor and craziness to the show, lightening the mood in chaotic moments.

From the sensational set and live music to the jazzy dance breaks and emotional solos, the production does not disappoint. The cast and crew have been working extremely hard the past two months to bring such a notable musical to life.  The cast and crew invite you to attend the townwide dance party at the Hamilton-Wenham Regional High School on Friday, November 8th at 7 pm and Saturday, 9th and 2 and 7 pm. ABBA’s unforgettable music will fill your heart and make you feel like a true dancing queen. Tickets available at brownpapertickets.com or at the door.