Are Robots Taking Over the World? 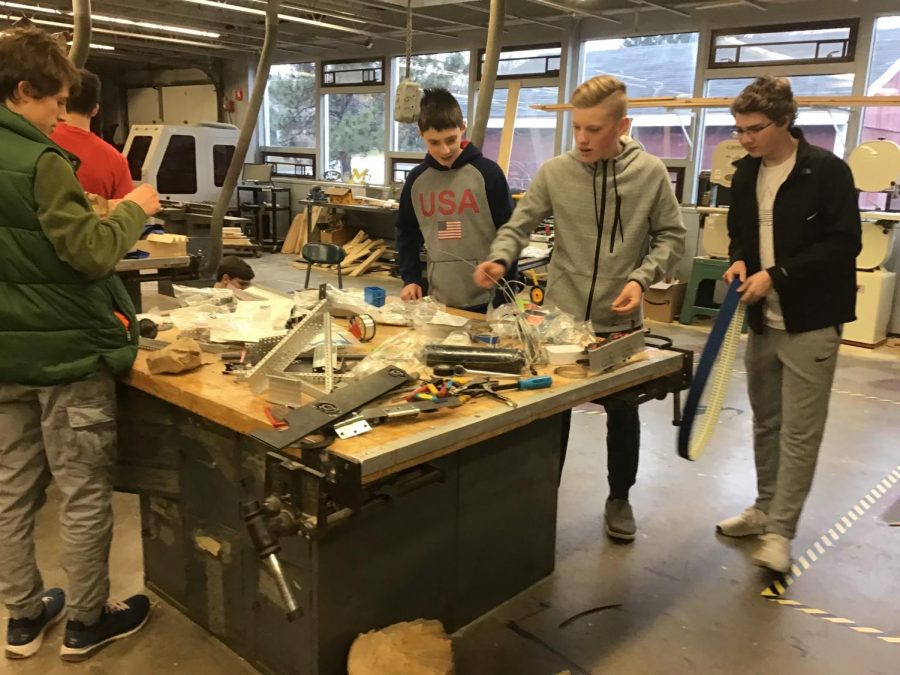 Are robots taking over the world? Robotics Club advisor Mr. Shippen, says, “Yes, given enough time robots will replace almost every job. Maybe not in the immediate future, but eventually.”

This club meets after school every Tuesday in room 202, and everyday during build season (January 4th to February 27th).

The captains are all very supportive and work closely with newcomers that aren’t sure what area they want to focus on. The captain of the electrical team, Ben Feron, said that when he joined the club last year it, “turned out to be more of a team than a club”.

The Club spends of its time preparing for the F.I.R.S.T. Robotics competition. The entry fee to register is $5000, which includes the starter kit. The kit includes a frame, drivetrain, motors, the “brain”, wires, fuses, 12 volt batteries, etc. After the initial entry fee, a team is permitted to spend up to an additional $5,000 on parts, but no more. If a team succeeds and advances to the next level of the competition it will cost them another $4,000 to compete.

In order for a team to succeed they need to get points at competition. Teams earn points for performing different tasks for 2 minutes. The tasks that teams need to be complete change every year. In previous years teams have had to place hatches, load balls, and throw balls. This year, all that is known about the competition is that Disney will be hosting the competition. The teams will have to build something, but at this point, exactly what they’ll have to build is up in the air. The teams will compete against others to move on the rounds. This first round are comparable to preliminaries in sports. In the first rounds teams are randomly paired with other schools and are called alliances. Paired alliances compete against other alliances, one on one, and the alliance that scores the most out of the two will move on to the next round. In the final round, the top schools select other schools to be on their alliance. Within these alliances are several of the best schools, who work together to try to get more points. The winners of the final round move on to the next competition.

The F.I.R.S.T. Robotics competition is a very competitive event. On average, 42 schools compete at the district level.  The top schools may receive sponsorships to upwards of $100,000. While only $5,000 is allowed to be used directly for the parts, the rest of the money can be used to getting more advanced equipment and programs, as well as marketing.

The initial plan for the robot takes just one day. However, the first plan doesn’t always work out, so they club needs to go through a trial and error period in order to find the best possible build. After a plan is agreed upon, the team works tirelessly for roughly three months to create the perfect robot. Last year they built a robot and named it Sherman. They picked this name because, at the local park (Patton Park), there’s a Sherman tank. This inspired them to design the robot to look like a tank.

While the clubs origins are still unknown, it was recently revived in 2018 by Mr. Shippen and was a hit right away. In 2018 there were fifteen members who competed in the robotics tournament. The 2019 seniors played a key role in recruiting potential members in order to revive the club. This year the club has 19 members who come regularly, with more planning to come after fall sports end.

Currently, there 13 male and 6 female members that consistently come to the meetings. While the women are the minority, they are by no means uninvolved. Several have become the captain of their respective departments. Regardless of gender, everyone that comes actively participates, according to the captains.

Whether the club is planning, dissembling Sherman, coding, marketing, or building, everyone has a role to play.  This program is creating new opportunities for all the members that may not have been offered before.

No one believes this more than the captain, senior Reed Miller,  who says, “Innovation and design of the team helps grow the community through communication and teamwork for the future generations.”