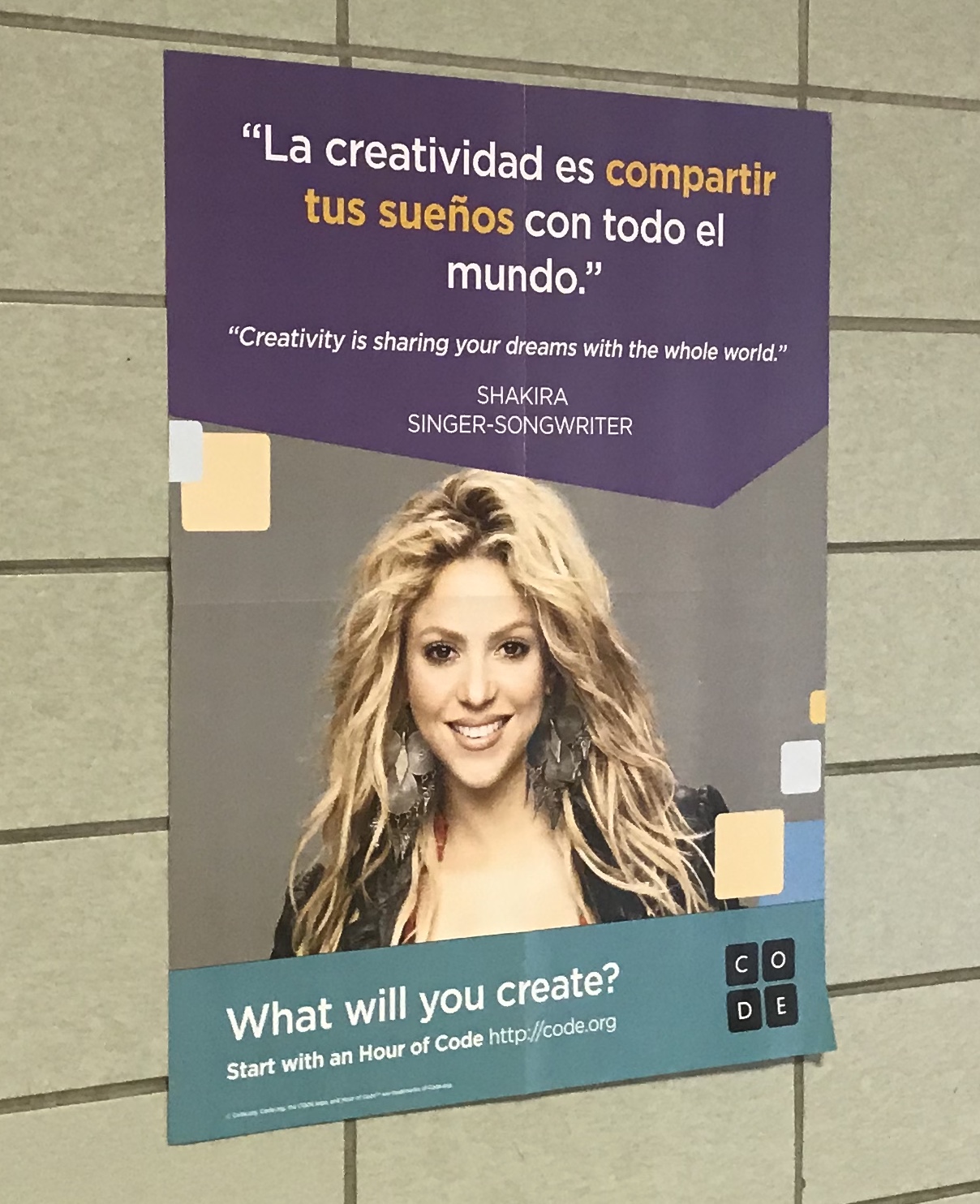 An hour of coding can turn into a lifetime career

As you walk down the foreign language hallway, Shakira smiles brightly at you from a poster. Above her face, it says, “La creatividad es compartir tus sueños con todo el mundo”: Creativity is sharing your dreams with the whole world. You look closer and you see that it is a poster for Hour of Code. You may be wondering, what does Shakira have to do with Hour of Code? Well, Shakira’s words of wisdom motivate students to share their creativity with the world, which is also the mission of Hour of Code.

Hour of Code was originally founded in 2013 by Iranian twins Hadi and Ali Partovi as a program to make computer programming more accessible for young students. Hadi graduated from Harvard University with a master’s in computer science, and he has been involved in many technology startups with his brother. Together, they are CEOs of the nonprofit Code.org.

For most schools, Hour of Code functions as a one hour introduction to computer sciences. Today, this program has expanded tremendously worldwide and there are over 711, 734, 296 users, and increasing quickly. It has found its way into elementary schools, middle schools and high schools in order to teach students about coding at young age.

According to HourOfCode.com, “Every student should have the opportunity to learn computer science. It helps nurture problem-solving skills, logic and creativity. By starting early, students will have a foundation for success in any 21st-century career path.”

By learning the basics of programming, students have an exciting opportunity to create whatever they wish. A student could program a video game, play a game of bowling, or work with robots by typing in a few lines of code. Hour of Code makes it easy for students of all ages to discover what coding is and how it is used.

Hour of Code was first introduced to the Hamilton-Wenham school system in the elementary schools. Ms. Wilson saw Ms. Hebert and Ms. Putnam incorporating coding activities in their libraries, and was inspired to bring it to the middle and high school. “Maybe [Hour of Code] is something that will spark [students’] interest [in coding]. That’s my goal, even if it’s just a few kids out of all these students that are like ‘this is my jam, I’m doing this’ then that’s pretty powerful,” she said.

Besides fueling new passions, Hour of Code also provides an opportunity for students to learn skills that will be beneficial in the future. Ms. Wilson mentioned how Hour of Code helps prepare students for potential careers. “They always say in education… that we don’t know what jobs are going to out there for you guys, like what are we preparing for? I would bet that computer programming will be available for you in the future, and that’s something good to have a good understanding of.”

If you walked into the library between December 3rd and December 7th, you would’ve seen bowling pins lined up against the wall and whirring robots rolling across the green carpeting. Usually the library is a place for peace and quiet, where students do homework, print assignments, and sometimes even read. However, Hour of Code transformed our library into a whirlwind of activities and an exciting place to discover the world of code. There are a variety of games and activities that draw in students of any age and any skill level. From sixth graders to seniors, everyone was laughing and enjoying working on a project, whether it be coding a bowling ball to knock over pins, getting an animal to dance to your favorite song or going for a hole in one in golf. The games not only promote teamwork and problem solving skills, and they are fun for everyone.

Ms. Wilson tries to change up the activities every year to keep the experience exciting and fresh. Her favorite activity this year was Sphero Bowling: “I love hearing the sound of the pins going down… I like seeing kids get creative with that and realize you don’t have to code it [to go] once down. You can actually code it to come back and hit some pins on the way back.”

We spoke with a group of 8th graders about their experiences, and they all appreciated the variety of activities. Some of these students worked with the Sphero robots and others coded with the dance party activity. Sam Richardson, an eighth grader, “thought it was going to be typing and no drag and drop, but it was a lot easier than I expected.”.

While some students only found it as a chance to have fun and miss class, others saw other potential benefits. “We were also sharing it with 6th graders so we also got to work with them a little bit. That definitely helped make us more of a school community, which helped improve teamwork and communication,” said Eliza Bassom, an eighth grader at Miles River.

One of the goals of Hour of Code is to interest students in a possible coding career, so did middle schoolers find coding interesting enough to pursue it in the future? “I thought it definitely increased the amount of fun people associated with coding, and it will definitely make kids wonder more about going into a career involving coding,” said Sam Richardson.

Outside of the coding games and Sphero robots, junior Sophia Szady ran a presentation on coding functions with Python. Last year she took AP Computer Science’ where she learned how to code in Java. Hoping to expand her coding knowledge, she is now conducting an independent study and learning Python. The functions she chose were from different math levels, ranging from Algebra 1 to Pre-Calculus. “I thought maybe I could show other people that coding isn’t as scary or intense as they think it is and even not as boring… it’s something applicable to their lives, something that makes math work easier,” said Sophia.

Sophia was surprised by the positive response she received from students. “I learned that it’s really not that difficult to have [coding] appeal to kids.” The 8th graders would certainly agree. “It was a very simplified version, but they did do a good job of making it simple, and it was fun,” said Luke O’Connor, an eighth grader at Miles River Middle School.

One of reasons that coding is so appealing and helpful to students is that it teaches student problem solving and critical thinking skills. It can also be a creative outlet for students looking outside the traditional realms of art. “I think even though people don’t usually think of numbers as a creative thing… students get really creative with code and you can create art, you can create music, you can go about solving problems in a creative way,” said Ms. Wilson.

If Hour of Code has piqued your interest, you can join the new Coding Club after break! This club will be an opportunity for high schoolers and middle schoolers to interact with and for students to expand on the small taste of code they have gotten from Hour of Code, because the world of code is limitless.