What is the best 1:1 program for Hamilton-Wenham? 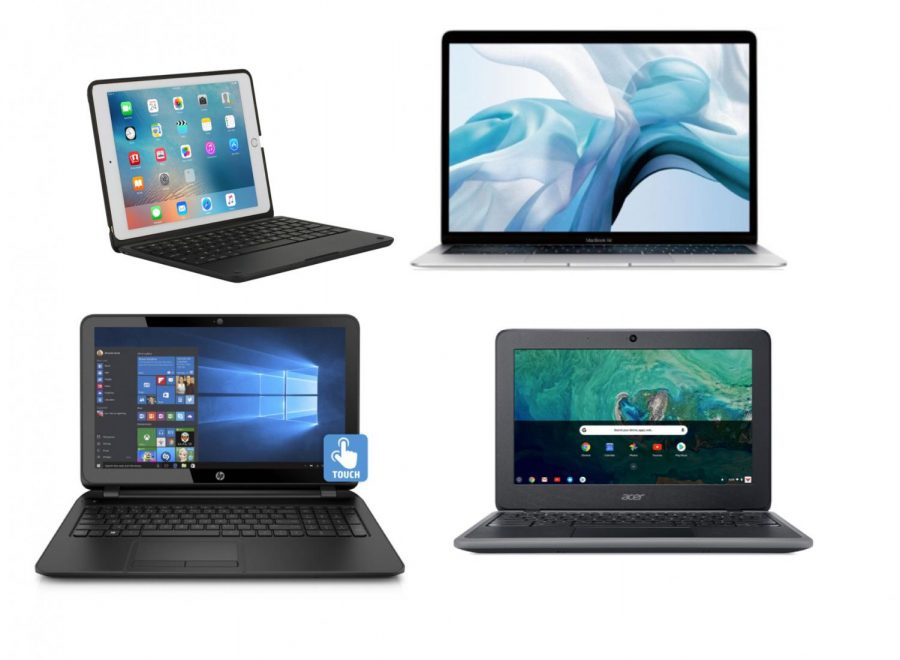 Students in the halls of the high school are tired–tired of lugging 7 binders and textbooks back and forth from home to each class. Fortunately, students now walk through the halls with less weight on their back thanks to Hamilton-Wenham’s 1-on-1 program.

Hamilton-Wenham has had a 1-on-1 learning system involving a device for some years now, and the school suggests that students use a school administered iPad. The school needs a device that has easy mobility. iPads can either be bought by the student, or loaned to a student by the school in exchange for yearly payments. The iPads include all the apps that the school says a student will need for their classes. However, this isn’t the case for every student. Not every student is carrying an iPad around with them day-to-day.

If you walk into any given classroom, odds are you will see a substantial range in devices being used. While the most popular is the school-owned iPad, many students use computers, generally either a Macbook, a Windows, or a Chromebook.

While paper becomes more and more obsolete in the school environment, it’s crucial that we choose the best device for student learning.

So which device is best for school life?

iPads are the school’s recommended device, but what are some of the pros and cons of using iPads?

“IPads were chosen for their mobility” says Mr. Tracy. Many students use an iPad because of how easy it is to move around. But now with iPhone having a camera for classes computers are become a more common sight around Hamilton-Wenham.

When iPads aren’t a student’s number one choice, they will usually decide to use a laptop. Many students plan on using a school iPad for two years, then switching to a computer, however some students have both an iPad and a computer.

Macbooks are a common sight around Hamilton-Wenham, and are typically the second choice for devices.

Computers have the potential of becoming the main device for Hamilton-Wenham and it is possible that the computer will take over the 1-on-1 program in the future because of their growing popularity among students.

MacBooks are a good alternative for students who don’t like the iPads. However, some students don’t have enough money for a MacBook, which is why Windows and Chromebooks are also frequently used at the Regional.

Windows are a less common option for students in this school, but they should be considered due to a reasonable price tag and compatibility with almost all programs students use.

Most students are used to Chromebooks from middle school, but some prefer to use Chromebooks for high school as well.

There are many choices for devices to use during high school. Many people will end up using more than one in their high school career. Each one of these devices has both positives and negatives to using them. In the end it is up to the students to choose what they want to use the device for, and what they want their device to do for them inside and outside of the classroom. Overall, the days of pen and paper in classrooms are almost gone, leaving only a few teachers who choose to remain with paper. The presence of technology is here to stay and every student is going to have to choose their device one way or another.