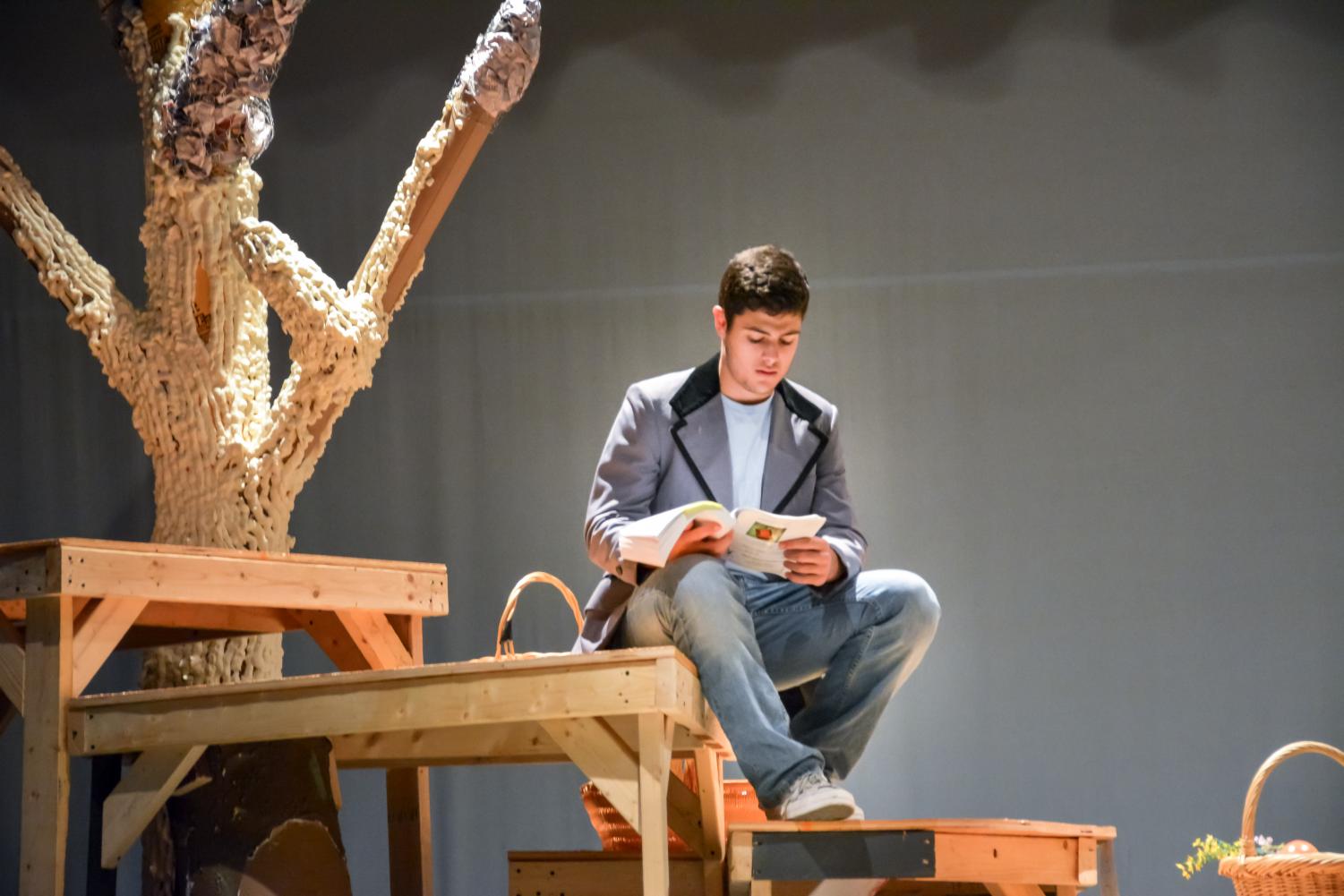 Domenic Brown as the narrator for the musical. (Brendan Callahan)

Domenic Brown as the narrator for the musical.

Out of the woods, and into the theater!

On November 9th, Hamilton Wenham Regional High School will open up the 2018-2019 school year with the performance of Into the Woods, bringing multiple fairy tales to center stage. The storyline was adapted from a musical into a movie but at Hamilton Wenham, they are taking the musical aspect and performing it on stage.

The music for Into the Woods was composed and written by Stephen Sondheim, and the original novel was written by James Lapine in 1987. The first releases of the musical opened up in November of 1987 and played at the Martin Beck Theatre in New York City. After reaching a total of 765 performances, the broadway musical was closed in September of 1989.

The movie “Into The Woods,” which was released Christmas Day in 2014, intertwines multiple storylines to create one story. The stars of the movie are famous Hollywood actors such as Meryl Streep as the Witch, Anna Kendrick playing Cinderella, Johnny Depp acting as the Wolf, Emily Blunt as the Baker’s wife, Chris Pine in the role of Prince Charming, and James Corden playing the Baker.

The film, directed by Rob Marshall, reached a worldwide total of $213 million worth of ticket sales. Rob is film director, producer, theatre director and choreographer.

“Into The Woods” follows the lives of a childless Baker and his wife who are given a curse stating they can not give birth to a baby. While they want  to have a child, the Witch who originally provided the curse, gives them a series of tasks to perform in order to reverse the family curse. Throughout the story, the Baker and his wife set out to find a series of ingredients that belong to other characters to reverse the spell. The ingredients consists of milk from a white cow, hair as yellow as corn, cape as red as blood, and a slipper of gold.

The cast and crew are preparing to blow our minds with their costumes and sets during their committed practice into bringing our imaginations or fantasies to the stage. As many of their sets consist of wooden pieces, and we can not wait to see what they can create from them.

The cast list is filled of experienced actors and actresses including: Bryn Smith as the Witch, Brendan Callahan as the Baker and Lily Wainwright as his wife, Helen Peppler as Cinderella, Will Glovsky as Cinderella’s Prince, Sydney Rahilly as Rapunzel, and Ian Castracane as Jack.

With the direction of Mr. and Mrs. Burnett and the incredible musical guidance of Ms. Simko, this cast of excellent individuals will come together and create an amazing show. With Ms. Simko’s help in providing harmony throughout the chorus, the group can prepare for many duets and group songs.

The cast meets everyday after school to build the set, work on choreography, sing and project, as well as work to include the theatrical units of theater that help to bring the musical to life. In order to bring the theater to life, the cast and crew will nail their transitions and bring their best work throughout the performances by getting into character, projecting their music, and providing an interesting combination of set design and lighting.

Mrs. Burnett, an advisor to the musical, also is a ninth grade honors teacher and twelfth grade college preparatory teacher, as well as leader to the senior internship program. She loves musical comedies, including Wicked and Spamalot. “I really wanted to choose a musical with recognition.” Due to the movie version, more viewers may have watched or heard of it.

“The energy that the students are bringing–both on the stage and behind the scenes–continues to impress and inspire me.”

She  revealed that, “The audition process itself consisted of four different songs from the show with the track and sheet music from the Broadway version. Students also came prepared with a forty second monologue of their own choosing from one of the characters or scenes of the play.”

The play has close to thirty characters and twelve crew members.  This is Mrs. Burnett’s eight year assisting the musical, and she is looking forward to the performance.

The energy that the students are bringing–both on the stage and behind the scenes–continues to impress and inspire me.”

Senior Bryn Smith, who has been cast as the Witch, will be majoring in acting and theater when she goes to college next year. She explains, “I have been interested in theater and the arts since the age of eleven and singing since the age of eight.” Bryn has expressed her love for musical productions over the years, but hopes Into the Woods will be her favorite high school production so far.

In order to help her get into the character of the witch she uses “character worksheets for specific scenes, focusing on the driving need, and being able to commit to a role that is redeemable to the audience during performance.” We are looking forward to seeing Bryn in full costume and makeup on opening night!

A few freshmen also earned roles in the show. Ian Castracane has been cast as Jack for this year’s performance. During his interview, he stated that “his teacher in second grade suggested he try acting and try out for a musical over the summer.” In order to get more in touch with his character, he explains, “I like to think about everything that motivates or impacts the characters.” Ian balances school and the play by using his spare time during the day to do homework and visit his teachers.

Leo Kagan, another ninth grader, has been interested in theater for four years. In order to play the Wolf, he coordinates his school and dedicates time to rehearsal. Leo states, “My favorite musical is Wicked and school production is most likely James and the Giant Peach.” Last year at Miles River, Leo played the grasshopper and was able to bring a nice accent to the stage. This year, we are looking forward to seeing him bring his acting abilities to the Ferrini Auditorium at the highschool and continue his great vocals!

Because it’s a Disney movie, the public has high expectations, but these students will rise to the challenge. They are hoping the performance will lead to high sales and record crowds due to the recognition and popularity of the movie.

Be sure to catch the performance of Into The Woods on Friday, November 9 at 7:00 p.m. and Saturday, November 10 at 2:00 p.m. and 7:00 p.m.! With catchy song lyrics and amazing actors in the cast, they will bring the audience to their feet, cheering for an encore!

Gallery|5 Photos
Charlotte Penn
Past Photos of many productions are outlined in the hallway outside the Ferrini Auditorium.
Leave a Comment