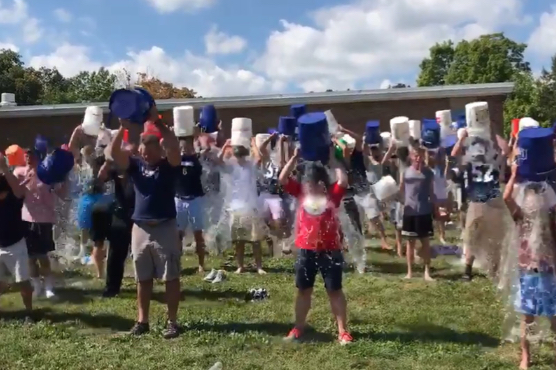 On Wednesday, September 5th, 2018, students at Hamilton-Wenham Regional High School dumped buckets of ice water on their heads to bring the Ice Bucket challenge back, the famous fundraiser challenge for ALS.

ALS, better known as Lou Gehrig’s disease is a fatal but rare disease that causes motor neurons to continuously degenerate until the ability for the brain to control muscles is gone. Those affected often lose the ability to move, eat, speak and eventually breathe. There is no known cause or cure for this disease.

At the school assembly last Wednesday, the entire school watched an ABC news story and heard the story from Nancy Frates about Pete Frates, her son, who was a rising baseball athlete and was diagnosed with ALS in March of 2012, at age 27. Pete was captain of the baseball team at Boston College in his senior year, was expected to be drafted into the Major League. However, Pete was not discouraged by this diagnosis, instead he was determined to raise enough funds to cure this disease, even though his doctor told him it was a death sentence.

Indeed, Pete said he would raise enough money to get the attention of Bill Gates, and his idea of the Ice Bucket Challenge became the cause he needed to raise awareness. With in 6 weeks he raise 220 million dollars and he was three quarters away  from his goal of a million dollars.

Now #HWGivesBack, a movement that also raised money to fight CMT4J for the Talia Duff Foundation in the previous year is joining the cause to fight ALS. On Wednesday, Hamilton Wenham High School raised 675 dollars for this cause, as well as challenging their sister schools, such as Ipswich High School, who accepted the challenge.

Where does the money go?  According to an article in the New York, Times 67% goes to research, 20% goes to patient and community services. 9% goes to public and professional education, 2% goes to fundraising and the last 2% goes to the payment process and fees.

“It felt great to be a part of something bigger than myself ”, says Audrey Kiarsis, a sophomore. “Because Pete Frates grew up in Beverly…” said Ava Cote, a freshman student., “…the story is more empathizing with a greater depth of gratitude.”  Even though this county is small, everyone come together to support one of its own.

The New York Times article on the ice bucket challenge and where the money goes and how it help.

An ABC news story on Pete Frates. This was show to the school when Nancy Frates cam in on September 5th.