As Coronavirus Cases Continue to Soar, so Does the Unemployment Rate 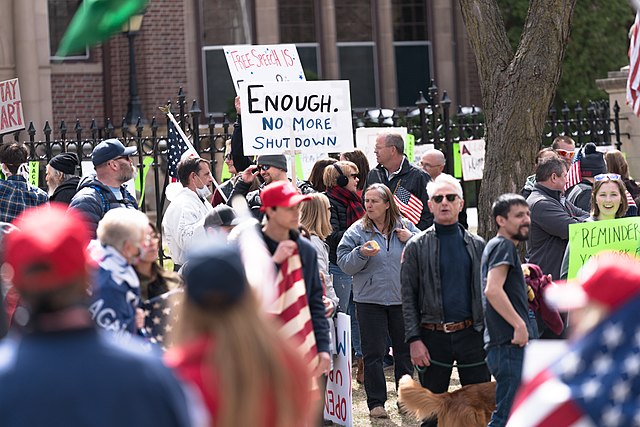 As unemployment rises, protesters gather in hopes of ending the shutdown.

All across the country millions of Americans are losing their jobs due to the shutdown of almost all public restaurants, stores, offices, and workplaces. This lockdown is seriously affecting the economy and it is only becoming worse, leading to unimaginable stress, protests, and long lines in food banks.

Around 3.3 million Americans have lost their jobs this year and have filed for unemployment benefits, according to the Department of Labor. Companies throughout the U.S. are either indefinitely closing or reducing their staff because they cannot afford to pay them anymore.

Since everyone is quarantined inside their homes, the amount of products being bought from stores has decreased. These are enterprises such as bars, boutiques, department stores and small corporations. Since no one is supporting them financially, the owners do not have any money to provide for themselves, thus producing the need to get rid of employees.

As employees are laid off, or as families have their income otherwise reduced, they are unable to spend as much on food or clothes. They can no longer afford, or have decided not to make any bigger purchases such as furniture, cars, or homes.

High unemployment rates raise concerns about the overall health of the economy, which makes investors less likely to invest in companies. This drives a decline in the stock market, causing further losses to not just the economy, but also savings and retirement plans.

In the past month, the S&P 500 index, which is a group of stocks that measures the stock market performance of 500 companies within the United States, has fallen 12 percent, according to the New York Times. This drop has lost about $3 trillion already and shows the impact of the coronavirus on the country.

Unemployment can also have further, more deadly consequences too. Anthony Laramie, an economics professor at Merrimack College, says “The health care sector of the economy is particularly affected by unemployment.” Since many of the workers who have lost their jobs rely on health care supported by their employer, this could have serious implications for their health during this crisis.

“The loss of health insurance potentially mitigates the health care response in slowing down the spread of the virus.” Laramie explains that as more people lose their jobs, it will become easier for the virus to spread throughout the country due to fewer people having health insurance. Many will be less willing to go to the doctor if they are sick or injured if they do not have health insurance.

Another concerning issue regarding the coronavirus is how the future economy will look if it continues to circulate in the United States. Laramie states that the “continuing of shelter in place orders generates a better long-term scenario for the economy…” because of how the typical economy functions and how the government is handling the virus.” He later says we can still “expect unemployment to continue to rise at an unprecedented pace.”

As more people are protesting the shelter in place protocol made by the government, it seems as though the coronavirus will not loosen its hold on the country. With coronavirus cases still rising we can turn to unemployment rates to partially predict the future of the economy, which will have unknown effects on the world around us.