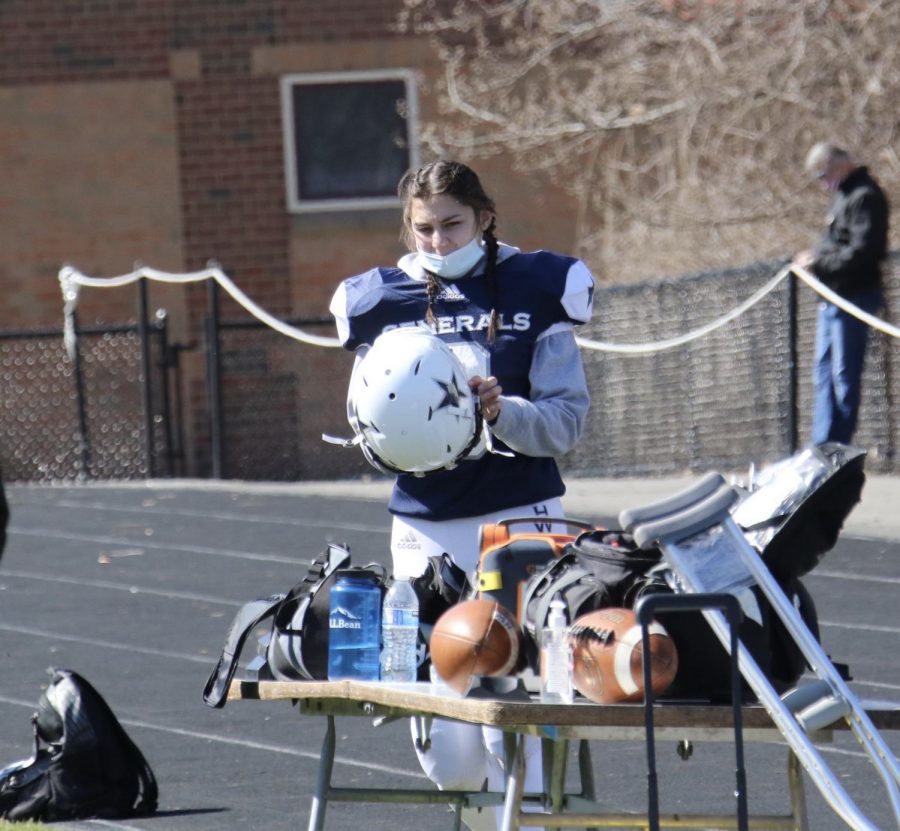 Christa Coffey is breaking down barriers and making history at Hamilton-Wenham Regional High School. Christa, a junior, is the first girl to play for the Generals’ High School football team. Christa is a multifaceted player with many strengths; in addition to playing wide receiver, Christa also plays defensive cornerback and kicker. Talk about girl power!

On Friday, March 12th, 2021 Hamilton-Wenham played its first game of the season against Newburyport. The challenging match ended in a loss: 41-21. However, the loss wasn’t all bad for Christa, as this was the first high school game in Hamilton-Wenham history that featured a female player. Instead of wallowing in defeat, the team celebrated Christa’s HW football debut.

It’s really cool to think about how I’m setting an example for young girls. I hope that the girls at Miles River will look up to me and be inspired to be ambitious and go out for the football team.”

At first Christa was reluctant to join the high school squad; she was worried that she didn’t have the skills it took to be a part of the team. Christa’s Dad, one of the coaches for HWRHS’s football team, in particular, was worried about her. “My Dad is very protective, so he was worried that I would get injured.” However, Christa is a  naturally resilient person and, during our interview, she made it clear to us that she is a driven individual who turns obstacles into opportunities. “I […] did it for myself, and the experience.”

“When Christa first came out for the team she was very timid,” Coach Pugh said, but quickly added:“But progressively she has gotten more aggressive and confident in her playing skills. She does the tackling drills, she does the hitting drills.”

Once she joined the team, however, Christa was determined to prove that she belonged. “Being the only girl on the team is awkward. There are a lot of times where I’m standing alone while the team is getting a pep talk in the locker room.” Overall though, “the guys make it feel safe and comfortable,” she asserts. Christa added that throughout the season she has found a family in her teammates.

Christa has a great relationship with her teammates, but initially they had to adjust to playing alongside her: “The boys are extremely supportive of me playing football…but I do feel like they go easier on me,” she says. “They don’t want to hurt me, but sometimes I wish that they wouldn’t go easy on me during practice, especially during drills where it would be helpful to get full body contact.”

Generals head Coach Pugh said, “She has done nothing but work and that’s why she’s gained the respect of, obviously, me, but the rest of the coaches and the rest of the team at school. She does the jobs that she doesn’t want to do. She is very willing to take whatever criticism comes her way. She works hard and always has a smile on her face.”

Coach Pugh’s daughter grew up playing football as well: “My daughter thought about playing football, too, but her school never allowed her to play on the boys’ football team. So that’s why I am so happy that Christa is allowed to play.”

In addition to being a three-sport varsity athlete, Christa works a part-time job and manages her schoolwork, too. “It is difficult to balance games, three-hour practices, work, and school. I come home with cuts and bruises,” she admits, “but hey, that’s the price you pay. But it’s extremely worth it.”

“It has been amazing what Christa has been able to accomplish,” Coach Pugh expressed. “It’s surreal to think about how Christa is breaking down barriers, making HW history, and showing girls everywhere that they can do everything and anything they set their mind to.”

Looking back on her journey, Christa is reflective about what it has taken:“Throughout playing I’ve learned that you have to be confident, you have to be a go-getter, you have to be comfortable with yourself and your surroundings and be able to try something completely new,” Christa states, “I hope that Hamilton Wenham continues to allow girls to play on boys teams. If girls want the chance to play I’d say “give it to them.”

We also interviewed Samantha Bucci, a senior at Hamilton-Wenham who played on the boys middle school football team when she was a seventh-grader. She told us being a girl on the boys team was difficult because she was smaller than the other boys. She explained that the boys were also not as supportive as she had hoped: “When we did drills or a boy had to go up against me in a drill they were scared they would hurt me or something.”  Samantha added, “So I put my hair in a braid and tucked it into my shoulder pads so the boys on the other team wouldn’t know my gender until the end of the game when I took my helmet off.”

Samantha also wished that people had treated her differently. One situation that stood out to her, in particular, was when an adult praised Samantha for being the fastest runner on the squad, but then told the team, “What, are you gonna let a girl beat you?” This made Samantha feel that, despite all her hard work, she was still not seen as good enough in the eyes of her teammates.

“The world has become much more accepting to non-gender specific activities, clothes, pronouns, etc,” Samantha said. “I think that a lot of girls aren’t scared anymore to join a predominantly male sport. With everything going on in the world right now, there has been a large change in gender and how it defines you.”

We asked Samantha how she feels about Christa playing, Samantha told us: “She is doing what I could never bring myself to do. I think that she’s a great athlete and she will be very successful.”

Samantha and Christa are part of a movement– more teenage girls than ever are playing football. According to participation statistics from the National Federation of State High School Associations (NFHS), 2,401 girls played high school football from 2017-2021. That’s more than has ever been recorded in the NFHSA’s history.

Here in Massachusetts–There are currently a handful of female football players in the Cape Ann League with towns such as, Ipswich, Lynnfield, Amesbury, Walpole, and Hamilton-Wenham.

Christa has played soccer for the past three seasons and will rejoin the team for her senior year. While Athletic Director Craig Genualdo describes this season as “…unique in many ways,” Christa saw this as an opportunity to try something new. A normal fall football season would require her to decide between football and soccer– a diversion, or her true passion.

Valerie Palmer-Mehta, a professor of gender/sexuality studies at Oakland University whose work focuses on women and rhetoric, believes that women’s involvement in high school football  is part of a broader cultural movement: “We can thank a constellation of cultural forces for women’s involvement in football today, from Title IX to the women’s movement, to strong female athletes who have persisted in pursuing their athletic dreams despite a lack of broader cultural support,” Dr. Palmer-Mehta said.  (“More Girls Are Playing Football. Is That Progress?” (New York Times, February 2, 2018)

Let’s face it– times have changed and so should the stereotypes. Women of today are astronauts, scientists, politicians, role models, and leaders. Why should athletics be so controversial? If a female is on a predominantly male sports team, people should realize that she is an exceptional athlete and has proven herself worthy of a spot on the team. That’s why Christa’s involvement with the Hamilton-Wenham football program is so important. It sets an example for young girls everywhere, letting them know that they can do whatever they set their mind to–even if what they want to do is nontraditional.

Christa understands that when it comes to football, being a girl in a traditionally male-dominated sport gives her a unique position as a role model in our community, and she takes that responsibility seriously. “It’s really cool to think about how I’m setting an example for young girls. I hope that the girls at Miles River will look up to me and be inspired to be ambitious and go out for the football team,” Christa stated.

Christa is proud to play under the Friday night lights and is proud to be a part of HWRHS history. She encourages all girls that are thinking about going out for football: “If you’re going to do it, just be prepared for a lot of weirdness. Go full in. Don’t be timid and be fearless.”