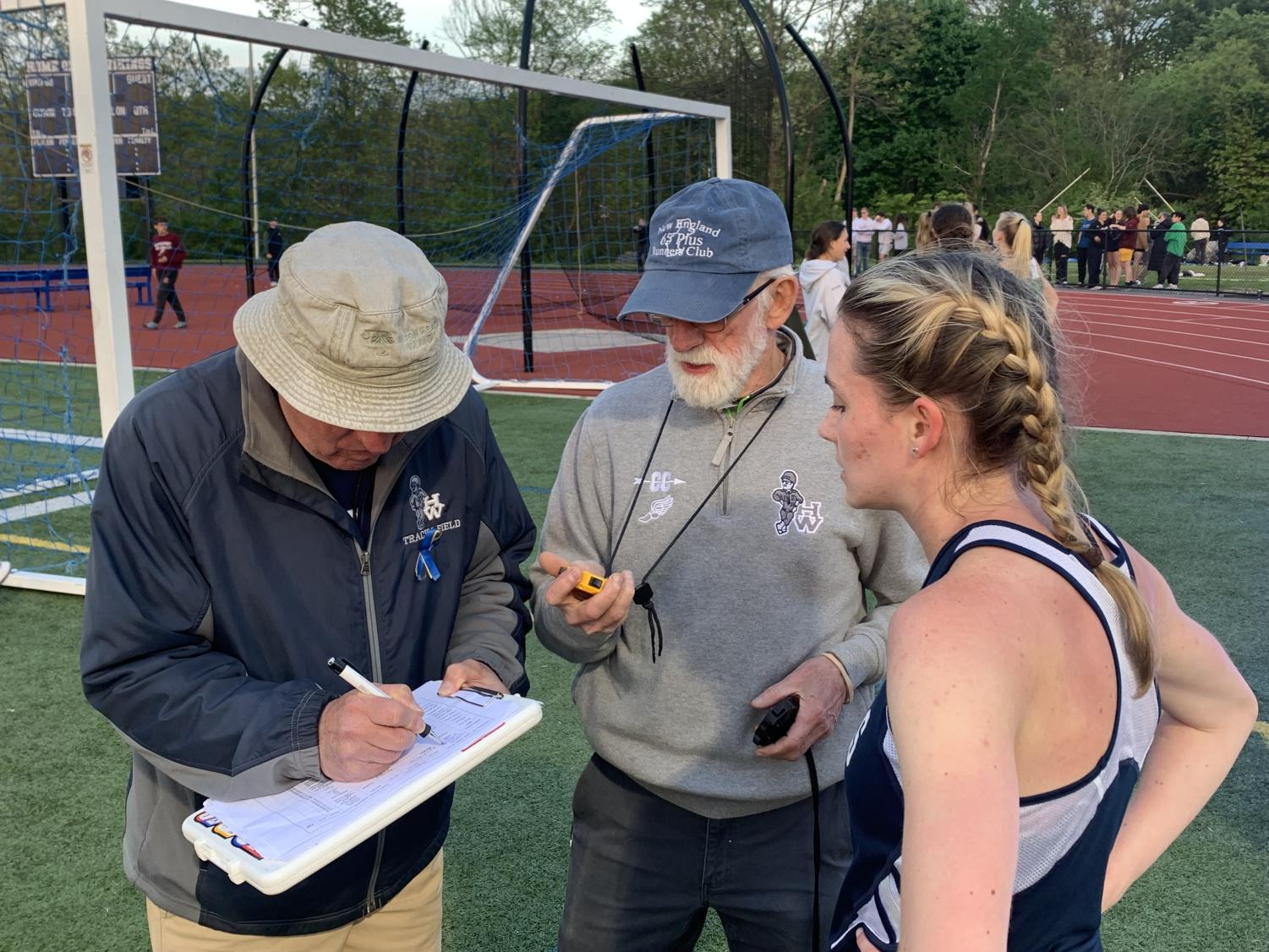 “He embodies the word ‘coach'”: The Inside Scoop on Coach Steve Sawyer

It is a sunny spring day at Hamilton-Wenham Regional High School. The thermostat reads seventy degrees Fahrenheit, and through the windows at the end of the math-science hall, one can view dozens of young athletes on the Steve Sawyer Track. In the middle of it all, shuttling back and forth between freshmen learning to dance gracefully over hurdles and upperclassmen perfecting their technique for the long jump, is the man for whom the track is named.

Most at Hamilton-Wenham know his name. Many recognize his face immediately. He is more than a coach or a long-time teacher; he’s a Hamilton-Wenham legend. He taught mathematics at the high school for thirty-five years and has been coaching track and field for fifty-three years. He was inducted into the Hamilton-Wenham Athletic Hall of Fame in 2016.

But for all of us that know of Coach Steve, how many really know him?

How many people know Coach Sawyer himself was a track and field athlete in high school, running the hundred-meter dash in 10.8 seconds at the All-State Meet in his senior year? Did you know that Sawyer taught at Masconomet before he came to Hamilton-Wenham? Surely, very few students know that Coach Sawyer wrote the Math of Finance course that we offer at the high school, or that he taught current Math of Finance teacher Joe Maher during the first year the class was offered.

I’ve known Coach Sawyer since my freshman year when I started running track. I’ve known him to be motivated and experienced, but I’ve always wanted to know a little more about his life and experiences–his career is legendary, but his personality, enthusiastic and humorous, is contagious. Since meeting him, I’ve unwrapped a few layers of the man that is Coach Steve, but there’s a lot more underneath the surface, because the truth is, even for all of us who know Coach Sawyer personally, very few of us have known him for his entire career. So in an attempt to uncover the stories and the life of Coach Steve over the half-century he’s been here, I sat down with Steve and those who have worked with him over the years.

Coach Sawyer was born in Farmington, Maine in 1943. If you’ve never been, it’s a small town in Central Maine, population 7,592. It’s an hour from Augusta and about an hour-and-a-half from the coast of Maine, located in the backyard of nearby University of Maine Farmington. It’s a little town that actually resembles Hamilton-Wenham in many ways. It has a downtown area, but isn’t a metropolis or a center of industry. It’s a historic town, with the first European settlers arriving in the late eighteenth century, building a sawmill and establishing a farming community. This farming community has endured over several centuries and expanded, remaining a happy little town in the middle of Maine to this day.

But most importantly, it’s where Coach Sawyer grew up. Sawyer, who attended Madison High School, was a standout athlete. As he puts it, he ran cross country his freshman year because “my dad would not let me play football.” For the next three years, Sawyer played football, basketball, and baseball.

He was a captain in all three sports, an MVP in football–the Class B state scoring champ as a running back–and ran at the All-State track and field meet his senior year. He graduated in 1961, moving on to the University of Maine for two years and then transferring to local Gordon College, where he graduated in 1965 with a BS in Science. Shortly after graduating from Gordon, he was hired by Masconomet High School, in Boxford, MA. After four years at Masco, Coach Steve was hired by Hamilton-Wenham Regional High School, and he began a very long stay here at the Regional.

“It was an exciting time to be at Hamilton-Wenham,” Scanlon recalls now. “We were all young and excited about what we were doing.”

We try to make the kids better people. It all really relates to life and what you’re trying to do as a human being, as you grow up and become a positive, happy, well-adjusted adult, and it’s all a process. Hopefully I can be a good part of that process and make it work. That’s what coaches try to do. If we win some championships along the way, that’s even better. And if we don’t, that’s okay, too.”

The keys to such a rapid ascent? Scanlon says it was a competitive attitude and a commitment to excellence: “I would say Steve’s a very big competitor. When we got going, Steve ran with the kids. There were times I had to keep him back because he was competing with the kids.”

It wasn’t just competition though. It was a boatload of talent too, Scanlon continues: “Everybody did weight training and everybody ran. With that formula, we were loaded with running and field events.”

What’s most remarkable about Coach Sawyer’s career is not the quick rise to the top he engineered for his team, but rather the continued success those teams have enjoyed for the better part of fifty years. As Scanlon recalls, “When Steve took over, he took over the Cape Ann League in terms of the girls program.”

Since 1981, when Coach Sawyer became the head coach of the track and field program, Hamilton-Wenham has captured twenty-six league championships and nine division championships between the boys and girls teams. The cross country teams, which Sawyer has led since 1979, have run their way to thirty-four league championships and fourteen division championships. Five times in the last twenty-five years a Hamilton-Wenham girls cross country team has held the title of All-State Champions. This is not to mention the individual hardware Sawyer has collected as the winner of countless Cape Ann League “Coach of the Year” awards.

His legacy is in the lives of every person he’s coached. To me, he embodies the word ‘coach,’ and every person that comes into contact with him is a better person. There are people that will never meet him that will be influenced by him, because of the people he’s influenced.”

When asked about this remarkable level of consistency, Sawyer responds, “It’s a big commitment. You’ve got to be here every day with the kids.”

And he has been. It’s one of the hallmarks of Sawyer’s personality, his ability to get up every day and remain unchanged by an ever-changing world. According to Mr. John Kotch, one of our science teachers and a long-time coach for Sawyer here at Hamilton-Wenham, “[Sawyer’s] changed zero. Same jokes, same sayings, same general philosophy.”

Coach Sawyer has stayed consistent not only in his attitudes and his discipline, but in his sense of humor as well. Former students like Hamilton-Wenham teacher Mr. Joe Maher remembers that humor well: “He was kinda silly, a lot of funny quirky things that kept us on our toes. He always had a lot of energy, raring to go for class.”

Maher added: “You looked forward to being there, you always knew that there were going to be some funny things happening and you knew you were going to learn. Those are the things I remember: being in his classroom, just learning math with him but being able to have a fun time.”

Jackson MacDonald, former student and record-holder for many events in indoor and outdoor track alike, recalls Sawyer’s sense of humor too, saying his former coach was always “Outgoing, full of laughter… [He] brightened up a room.”

However, when the team needed to focus, Sawyer knew how to get everybody on the same page, McDonald says, adding: “On meet days, [he was] in the zone, full of confidence and determination.”

His greatest strength? MacDonald believes that it’s the way “He makes everyone feel included. The entire program always spent the first portion of practice together. Distance runners, throwers, jumpers, sprinters, JV, Varsity, etc. It didn’t matter who you were. The entire team spent the first part of practice together… When you compare it to other team sports where the varsity and JV teams hardly ever interact with each other, the track and field program never had any of those barriers.”

Sawyer also has a tremendous ability to connect with his athletes. MacDonald recalls: “After the [2008] season and towards the end of summer, [teammate Gabe Pacione] was in a terrible car accident and passed away.”

MacDonald continued: “As a friend of the family, I, along with the entire community, was in shock and devastated when this happened. During one of the services for Gabe, after paying my respects, I broke down. Somehow, Steve was right next to me and hugged me while I stood there crying on his shoulder. He has always been there for not only myself, but his teams and the community.”

MacDonald’s heartfelt story about Coach Sawyer is not the only example of his commitment to his athletes or his community. According to Athletic Director Craig Genualdo, who began working with Sawyer in 2012, “His legacy is in the lives of every person he’s coached. To me, he embodies the word ‘coach,’ and every person that comes into contact with him is a better person. There are people that will never meet him that will be influenced by him, because of the people he’s influenced.”

To many, like MacDonald, it is Sawyer’s empathy and his dedication to helping the kids he works with that endures: “The success of his programs started and finished with the inclusive culture and atmosphere he promoted. He has set everyone who came through his program up for success in their futures, wherever that may have led them.”

But when I asked Sawyer to define his legacy, he wasn’t sure how to answer. I rephrased the question, instead asking what he believes he has accomplished as a coach. “We try to make the kids better people,” Sawyer said. “It all really relates to life and what you’re trying to do as a human being, as you grow up and become a positive, happy, well-adjusted adult, and it’s all a process. Hopefully I can be a good part of that process and make it work. That’s what coaches try to do. If we win some championships along the way, that’s even better. And if we don’t, that’s okay, too.”

While collecting interviews and information for this profile, two things stood out to me. As a writer, it struck me how consistent the words people used to describe Sawyer were: “dedicated,” “compassionate,” “inclusive,” “influential.” Also, it’s truly remarkable that he has been coaching for over fifty years, and even more remarkable that seemingly no one has a bad word to say about him.

But as a student and an athlete that has run for Coach Sawyer for four years, I found that this process simply reminded me of what I already knew: his mission is, and always has been, to make life fun. For Sawyer, it’s about making a difference and positively impacting those around him: “We want the high school kids to turn out to be decent human beings… things like respect, attitude, sensitivity, your attitude determines your altitude.”

And that’s really what it’s always been about for Coach Sawyer. That’s what he’s going to keep doing, impacting the lives of everyone he comes in contact with. That’s just Coach Steve.