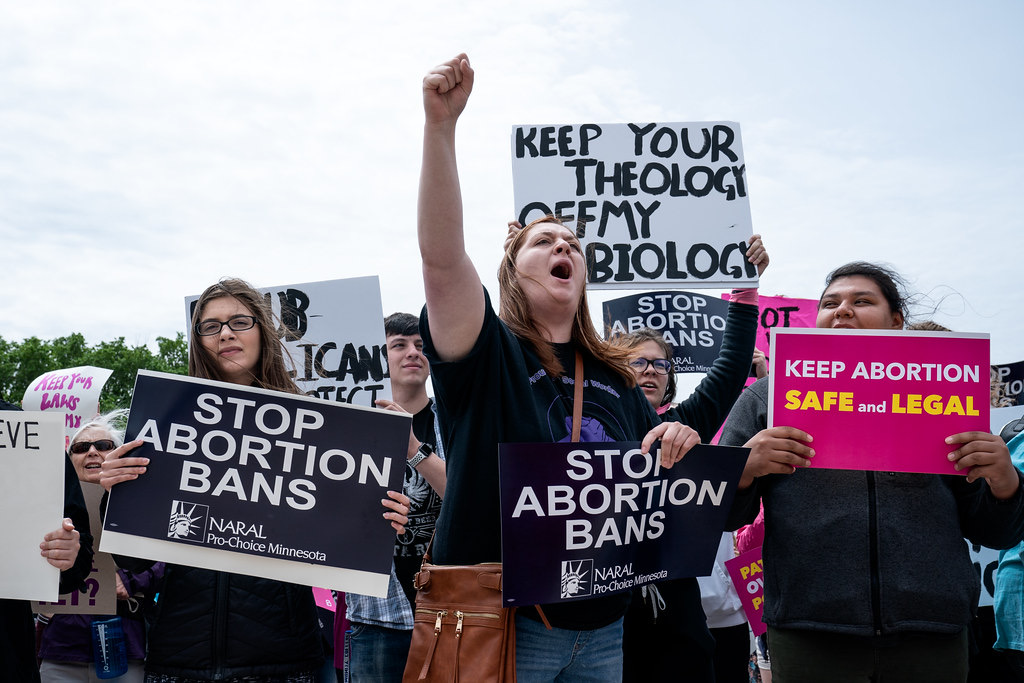 People who are pro-choice protesting to keep abortions legal.

Roe v. Wade and Why it Should Stay

In 1973 Roe v. Wade forced the Supreme Court to not only discuss abortion rights but pass abortion rights. Ever since reproductive rights got passed, the states have created more than 1,074 laws to restrict access to abortions across the country according to CNN.

In 1910 abortion was officially made illegal in the United States. Making abortion illegal not only pushed the practice underground but created a stigma around the topic. This turn of events caused a spike in back-alley abortions and an increase of death and illness caused by those illegal abortions.

Those back-alley abortions took the lives of 2,700 women in the 1930’s, according to Guttmacher Institute. In 1955 Planned Parenthood held one of the first conferences to legalize abortion. Planned Parenthood has been helping women since 1916, despite the violent backlash and crimes committed by people opposing abortion.

Finally, in 1973 abortion was made legal in all 50 states because of Roe v. Wade. This caused some pro-life supporters to commit violent hate crimes at abortion centers and protest outside of Planned Parenthood clinics, which still happens to this day.

Even with this backlash of legalizing abortion, PRB.org says that crime levels dropped more than 15% after Roe v. Wade was passed, and that crime rates dropped even faster the in states that legalized abortion sooner.

On May 3rd, 2022 a draft report to overturn Roe v. Wade was leaked to politico.com. This caused a huge explosion of emotion and opinion. People standing on both sides of the argument stood their ground at the supreme court to protest with signs and share their emotions.

People around the world did not hesitate to jump to social media to talk about the unfolding events. The TikTok trend “keep your laws off my body” has been included in hundreds of videos, all with thousands of views. You can learn more about this trend on this Daily Dot article.

Between 85% and 90% of Americans think abortion should be legal in at least some circumstances.”

Planned Parenthood says that “No matter what happens, [we] will continue to fight to uphold access to safe, legal abortion.” They are supported by more than 85% of Americans who think abortion should be legal in at least some circumstances (ABC NEWS).

On the one side of the opinion, “anti-abortion activists insist that from the moment of conception a fetus has an inalienable right to existence” according to The Guardian. Which is referring to the 14th amendment. The 14th amendment grants citizenship to all people born or naturalized in the United States.

Many arguments used on the side of being pro-life do make sense and they have a solid foundation. For example abortion risks and side effects, while rare, do still exist.

One of the key arguments against abortion is God values life and wants children to come into the world and not forbid them. This is an argument often used based in religious beliefs.

It is noteworthy, however, that more than 60% of people who get abortions have a religious affiliation ( npr.org) . 20% of those are Catholic, 17% are Mainline Protestant, 13% are

Additionally, it is a minority of Americans who are against a woman’s right to abortion. Only 37% of Americans want abortion illegal in most or all cases according to the Pew Research Center’s polls. With the knowledge that only 18% of pregnancies end in abortion according to Forbes.com, and 5% of pregnancies are a result of rape each year, that leaves about 13% of abortions in America that are done for other reasons.

One of many reasons is if the fetus will not survive to term. For example, central nervous system anomalies which cause the fetus to have an undeveloped brain and/or spinal cord.

Also according to The Guttmacher Institute, some of the most common reasons to have an abortion (not due to rape or health care risks) was that having a baby would dramatically change their life or that they can’t afford to care for a baby.

Taking action to prevent unwanted pregnancy by participating in safe sex or being on birth control can also fail, leading to pregnancy. Not having the financial stability to support another kid or not having a safe environment/relationship to raise a child in can also lead to abortions.

Some people simply don’t want children or don’t want more than they already have. According to The Guttmacher Institute, about 59% of abortion patients already have at least one child.

Removing the option to get an abortion will not magically remove abortions from the world, it will simply remove medically safe abortions. There is a high chance that the numbers will go back to what they were in the 1930s, and crime rates, illnesses, and deaths will all increase because illegal and unsafe abortions will still be performed.

If you don’t support abortion, don’t get one, but don’t take away another person’s right to choose. If you take away the option to get an abortion performed in a hospital by a licensed doctor, you are only helping illness and death take over thousands of woman’s lives, again.