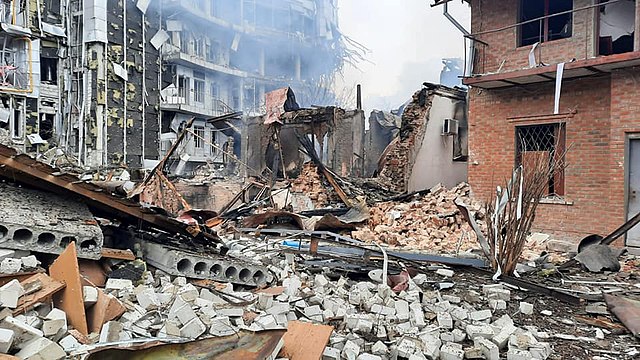 Destructions in Kharkiv Oblast after Russian shelling during 2022 Russian invasion of Ukraine.

Learn of the latest news regarding the Ukraine invasion.

As over two million refugees flee Ukraine, the world watches as Russia continues to take over Ukraine cities. Russia has been bombing and shelling several buildings and cities in Ukraine. The tensions between Russia and Ukraine are not new. While there is a lot of history to unpack, this timeline focuses on the 90s and onward.

Read on to learn about the latest news regarding the attacks and to understand a brief history of the tensions and conflicts that have led up to the 2022 Ukraine invasion.

May 30: Sanctions on Russia continue and the EU plans for additioanl bans on all Russian Oil.

May 12th: Human Rights Commissioner, Michelle Bachelet, reported over 1,000 civilans have been killed in Mariupol, and urged both parties to respect international humanitarian law.

May 9th:  Russia bombed a Ukrainian school that Ukrainians used as a shelter. 60 people are presumed dead after the bomb struck the school.

May 6th: Ukraine claimed credit for hitting a Russian boat called the Admiral Makarov with Missiles and setting it ablaze in the Black Sea.

April 24th: Two U.S. Officials, U.S. Secretary of State Antony Blinken and Defense Secretary Lloyd Austin, visted Kyiv, Ukraine on Sunday.  The U.S. government worked to keep this trip as much of a secret as possible until the men were safely out of Ukraine.  They met with Ukrainian President Volodymyr Zelensky to discuss the U.S. current and future asisstance and support for Ukraine.

April 8th: A Russian missile struck the Kramatorsk train station. Thirty-nine civilians died from the attack while hundreds of others remained injured.

April 3rd: Ukrainian President Volodymyr Zelensky addressed the horrific photos from Bucha which appear to show the bodies of hundreds of civilians, some in the street and others in mass graves. Zelensky called this absolute proof of war crimes and genocide. Russia has claimed the footage was fake and staged by Ukraine.

April 2nd: Another documentary film maker’s life has been lost. Lithuanian filmmaker Mantas Kvedaravicius was killed in a Russian attack while trying to leave the city of Mariupol. Mantas Kvedaravicius dedicated time over his carreer to the conflicts in Ukraine and premired the film “Mariupolis” at the Berin Film Festival in 2016.

March 28th: Ukrainian and Russian negotiators are scheduled to meet in Turkey on Tuesday, March 29th to discuss neutrality and Ukraine’s intentions to join NATO.

March 27th: Ukrainian President Volodymyr Zelenskyy does a 90-minute interview with four Russian journalists. Later that day, Russian news media was told by the government “of the necessity to refrain from publishing this interview.”

March 24th: Ukraine accused Russian soldiers of taking Ukrainian citizens as hostages and using phosphorus bombs, which set fires and release phosphorus, the air-dropping of which is illegal over inhabited areas.

March 22nd, 2022: The Ukrainian army retook Makarov a suburb of Kyiv, which had been previously occupied by Russian forces.

March 21st, 2022: Russia demanded that the occupied port city, Mariupol surrender by 5 am Monday morning, the 21st. Mariupol authorities have not surrendered and the deadline has passed.

March 13th, 2022: Award-winning American journalist, Brent Renaud, was killed in Iprin, Ukraine. Renaud was in Ukraine documenting the tragedies occurring throughout the country. Russian forces opened fire on his car. He is the first American casualty.

March 11, 2022: Ukraine accuses Russia of abducing the mayor of Melitopol.  Russia recently took control of the Melitopol during the invasion.

March 4th, 2022:  Russia passes a bill that threatens to put any citizen in prison for up to 15 years for spreading fake news about their military or actions in Ukraine.  Russia is calling their invasion on Ukraine a “Special Military Operation” to get rid of Nazi’s in Ukraine. If any Russian speaks out against this information in any way, calling in war or an invasion, they could be sent to prison.

March 3rd, 2022: Ukraine’s port city Mariupol is under siege by Russian Troops, cutting the city off from living essentials like food, electricity, and transport.

March 2nd, 2022: Late Wednesday, Russia seized control of Kherson, a key port city in southern Ukraine. Taking a major port city is reportedly a strategy for controlling and isolating the whole country. The mayor of Kherson said Russia had forced its way into the city council building and was enforcing curfews on the residents.

March 2nd, 2022: The Society for Worldwide Interbank Financial Communication (SWIFT) will remove seven Russian banks because of sanctions against Russia. SWIFT is not used for money transfers; it is a messaging system to connect banks to one another. Cutting Russian banks from the messaging systems will impact them and their economy.

February 28th, 2022: International Crime Court is opening an investigation of war crimes and crimes against humanity.

April 21st, 2019: Volodymyr Zelenskyy was elected President of Ukraine and defeated the pro-Russian candidate, President Petro Poroshenko. Zelenskyy ran on the Servant of the People platform while Poroshenko was the incumbent president.

March 18th, 2014: Russia seizes Crimea – Russia makes Crimea their property naming the region “The Republic of Crimea” and a federal city, Sevastopol. This was considered an annexation and the Russian military was inserted to pose nuclear threats to Ukraine.

November 21st, 2013: Revolution of Honor – In a dark year for Ukraine when tensions were rising in November of 2013, students organized a protest in order to persuade their then-president Viktor Yanukovych to go forward with an EU agreement. This led to a revolution and a counter-revolution to overthrow the Ukrainian government. Russia decided they would “free” eastern Ukraine by placing soldiers on the territory.

December 1st,1991: Ukraine voted and became independent after the Soviet Union fell.  Around 90% of voters supported independence. Russia tried to persuade them to reenter the new Soviet Union but they stood firm in their path to independence.

Ukraine: What You Can do to Help 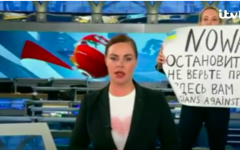 The Dangers of Propaganda