Journalist Marina Ovsyannikova ran on to the set of the network’s live nightly broadcast to protest the War in Ukraine.

The Dangers of Propaganda

Russia is known for spreading propaganda and denying public information to its citizens. To that end, it is no surprise that they continue to push a false narrative about the Ukraine invasion. According to the Russian government and all state news TV broadcasts, they are undergoing a special military operation and fighting neo-nazi’s in Ukraine. Putin has repeatedly told his citizens that the whole world is conspiring against Russia and their military actions are to protect Russia itself.

Russian citizens are not given access to legitimate information about what their country’s role is in the Ukraine invasion. Russia has gone so far as to make a special video to show citizens why NATO is a danger and why the military operation in Ukraine is essential. This video  is used to help in the indoctrinating of their children into thinking their actions in Ukraine is a “special military operation.”

This is George Orwell’s 1984 in live-action. Russia wants its people to think that they are banishing “neo-nazi’s” in Ukraine.

Recently, a journalist interrupted a live news broadcast to protest the war. She held up a sign that said, “Don’t believe the propaganda. They’re lying to you here.” She was immediately detained. Russia recently passed a law that said anyone who contradicts the Government’s narrative could face up to 15 years imprisonment.

The brutality of Russia’s actions in Ukraine and spreading of propaganda is affecting people all across the globe. In a day and age when social media can be an abused platform, it is important to dig into the images or news headlines to ensure they are real and coming from reliable sources.

The invasion of Ukraine is so catastrophic that it is crucial to understand which news platforms are reliable.

Millions of people around the world are glued to various news sites, taking in the tragic scenes of war on the Ukrainian home front. But in the stead of the rapid release of new stories, there has been an influx of fake news.

Fake news is not only misleading, it can be dangerous. Several social media outlets claimed photos of destruction in a residential housing complex in Chuhuiv, Ukraine, were actually of a 2018 gas explosion in the Russian city of Magnitogorsk. When the photos were compared to those of the actual gas explosion, it was clear the Ukraine photos were genuine and not fake as the social media outlets had claimed.

Additionally, there were claims that a “crisis actor” posed in the photo to act out the scene which proved to also be fake news. It was later discovered that these posts has been made by pro-Russian and conspiracy accounts online.

Fake news isn’t always meant to deceive the average viewer. Recently, many have been comparing Russia’s invasion of Ukraine to Hitler’s actions during World War II, when he had been trying to take over all of Europe. A widely publicized Time Magazine cover depicted Putin’s face merged with Hitler’s face, making the direct comparison between the two dictators. However, that was not the actual time magazine cover, it was an artist’s rendition, though many were fooled into thinking it was the real thing.

“The New Voice of Ukraine” posted the fake cover seeming to take it at face value. However, one commenter retweeted the actual Time magazine cover showing that anyone can fall victim to fake news.

Whether it’s propaganda or an accident, false information can be detrimental. Research is imperative, especially in a time of crisis. 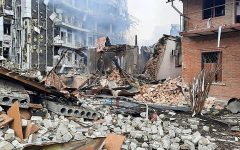 Ukraine: What You Can do to Help